On Wednesday, 18thApril, the new website ParentPower was formally launched in Parliament at a meeting hosted by Sir Jeffrey Donaldson MP.  The strapline to the site is ‘empowering parents to protect children’ and the DUP MP for Lagan Valley began by saying how much this was needed, because successive governments had by their policies undermined families and eroded parental rights.  As result, he said that increasingly today parents needed help to cope with ‘the system’.

Highlighting family as the essential building block for society, he commented that over the last few years the State has been assuming ever greater control, usurping the rights of parents over their children. He said, “The ParentPower website will provide support … offering a platform from which parents can get help and advice and empowering them to take their rightful place in the education system. Parents do not have the support they need or the advice they require about their children’s education.”

ParentPower is the result of a coalition between various campaigning groups, including Voice for Justice UK (VfJUK), SPUC, Christian Concern, and Christian Education Europe. Revd Lynda Rose, CEO of VfJUK explained that the idea for the website came out of a conference on Education held by the group last year.  From the start, she said, parents had expressed extreme concern over education policy and what their children were being taught.  But they felt intimidated, she said, because they didn’t know the law and didn’t know how to make their voice heard.   They called for a website that would keep them abreast of latest developments and issues, let them share and discuss their concerns with other parents, explain the law and give advice, and, if necessary help them with complaints procedures.

To give an illustration of the need, Revd Rose introduced Liane, a young single parent with two children, aged 5 and 15, who had suffered an appalling campaign of intimidation and abuse from the school her daughter was attending, after she complained about a sex ed lesson.  Her daughter, at the time aged twelve, had been left deeply confused by what she heard, but she had then been traumatised by witnessing the self-abuse of another pupil in class immediately following the lesson.

Liane had expected help and support, but instead her concerns were dismissed as bigoted and homophobic.  For weeks afterwards her daughter was subjected to systematic bullying and abuse by the school, which alleged that her mother was mentally ill (there was never any evidence of this) and reported the family to social services.  They also confiscated the child’s mobile phone and her scooter ‘disappeared’, eventually to re-emerge in pieces in lost property. Apparently they returned it to her with the words, ‘See if your mother can fix that then!’  As result of this distressing experience, Liane shared that she is now home schooling both children.

Dr Tom Rogers of SPUC, commenting on Government proposals to make RSE mandatory, asked how a parent in Liane’s position would be treated under the new guidelines, once in force. He warned, “They (schools) seem determined to forcibly indoctrinate our children with this new official state ideology.”  He too emphasised the need for a resource where parents experiencing similar problems could get help.

Ed Matyjaszek, Headmaster of The Priory School on the Isle of Wight, then explained the legal rights of parents under current law, referring expressly to the Fundamental Declaration of Human Rights, enshrining the principle of protection for freedom of belief, and section 405 of the UK 1996 Education Act, giving parents the right to withdraw their child from sex education.  He explained how advice and help would be available to parents through the website, including, where necessary, practical help to challenge a school’s policy or make a complaint. 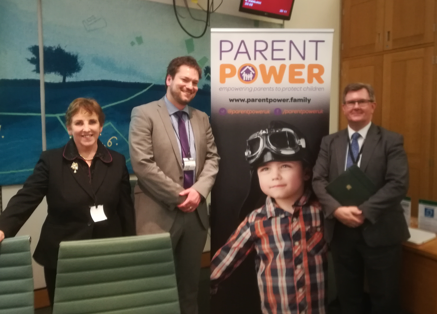 Finally, Nigel Steel of Christian Education Europe rounded off the evening with a detailed presentation and introduction to the website itself, which was he said attractive, comprehensive and very easy to navigate.  Visitors can currently comment on the various articles, he explained, but very soon the Forum, providing a platform for discussion and debate, will be fully operational, and he hoped that parents would take the opportunity to raise and discuss any issues with each other.  All speakers agreed that they hoped the site would become a first port of call for parents, and that it would prove a useful tool empowering them to protect the interests of their children.