Is there a case for Same-Sex Marriage? 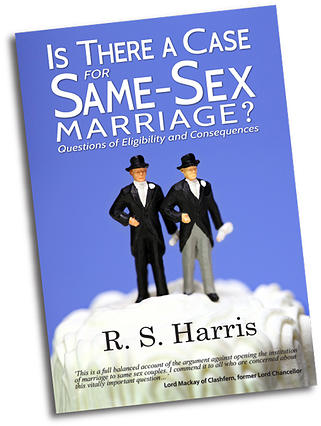 This is a full balanced account of the argument against opening the institution of marriage to same sex couples. I commend it to all who are concerned about this vitally important question. The reader will be able to reach a conclusion on this issue confident that it is based on a thorough analysis and not dependent on any view he or she has previously formed.
The Rt Hon the Lord Mackay of Clashfern KT, former Lord Chancellor of Great Britain

The support of same-sex marriage by our political leaders has almost inhibited reasoned discourse around this complex and sensitive issue. So this well-researched and measured publication is a timely contribution which offers light rather than heat with well-documented information. I commend it especially to those with open minds who believe in democratic debate and want to hear both sides of the argument.
The Baroness Cox, former Deputy Speaker of the House of Lords

This is a well-researched, balanced, comprehensive and marvellous study. I found it most useful in collecting my arguments together and getting so much great information on the whole background in an infinitely fair and extraordinarily well-reasoned way. It puts paid to those arguments made by same-sex marriage advocates which we thought were so convincing. The six essential components of marriage listed and explained by the author are a powerful argument that makes it absolutely clear that civil partnerships can in no way be deemed to be marriage. This study needs to be read by a wide audience.
The Baroness O’Cathain OBE

This is in the great tradition of British pamphlets – clear in its exposition, convincing in its arguments, it should be required reading for every politician, especially those well-intentioned leaders whose insufficiently thought out proposals could have the unintended consequence of undermining the very bedrock of our still stable family-based society.
The Lord Cormack DL

Marriage for me is a sacrament and a union between a man and a woman. This is an important part of my religious belief as a practising Catholic. The attempt to redefine marriage would have serious consequences for family life and indeed society. R. S. Harris has written a well balanced and thoughtful defence of marriage and I recommend this work as part of the wider debate that is taking place.
Jim Dobbin MP, Member for Heywood and Middleton

For some this study will not make for comfortable reading, but it ought to be read and studied by all. R. S. Harris very carefully appraises and challenges the arguments of those who seek to change the traditional understanding of marriage and its nature. I would encourage the wide circulation of, and proper engagement with, his careful analysis of the wide range of issues involved in a matter which will have implications for our whole society and its future.
The Rt Revd Dr Michael Langrish, Bishop of Exeter
​

R. S. Harris has been nothing if not thorough in his description and analysis of the issue of same-sex marriage. He points to the uniqueness of marriage as a publicly undertaken relationship between a man and woman for life and to the exclusion of all others. He shows how other relationships, whatever their value, should not be confused with marriage nor can it be said that the benefits of marriage would accrue to these relationships if they were. He considers the question of identity and cautions against confusing inclinations and desires with fundamental questions about who we are and what we are here for. His work makes for compelling reading and his opponents have a lot of questions to answer.
The Rt Revd Dr Michael Nazir-Ali, former Bishop of Rochester and former Member of the House of Lords; President of OXTRAD

Healthy Parliamentary Government requires that those proposing legislation know that they will face robustly argued opposition. It is therefore thoroughly unhealthy that in the matter of ‘Equal Civil Marriage’ there is so remarkable a degree of consensus between the political Parties, not only in support of the proposal, but in the apparent conviction that nothing can intelligently and decently be said against it. So I warmly welcome ‘Is there a case for same-sex marriage?’ as a comprehensive and extensively-referenced contribution to the debate; and I hope that responsible Parliamentarians will read it and weigh its arguments.
The Rt Revd Michael Scott-Joynt, former Bishop of Winchester; former Member of the House of Lords

An important contribution that highlights that this issue is far more complex than at first imagined, and cannot, solely, be decided on the idealism of a few. Whatever one’s position, Harris aptly demonstrates that the sensitivity of this issue may have been wholly underestimated by some members of the political-class and that formal equality is by no means an easy concept to grasp.
Dr. Abhijit Pandya, Daily Mail blogger; Executive Director of the Centre for Democratic Studies;
﻿﻿former Teaching Fellow at the London School of Economics

Those in the “uncertain middle” who do not wish to incur the intimidation of activists for “gay” marriage, find it more comfortable to declare an ambivalent or agnostic position on the matter. R. S. Harris’s comprehensive and evidence-based study argues that “equal marriage” fails the eligibility test for marriage and so is not discriminatory. His discussion on the related issues of children, and the legal position facing the churches will be illuminating for those not afraid to examine the evidence with an open mind.
Canon Dr Chris Sugden, Executive Secretary, Anglican Mainstream; Member of the General Synod of the Church of England

An excellent, valuable and fearless examination of the issues raised. It should be compulsory reading for all involved!
Revd Lynda Rose, Director, Voice for Justice UK

Important decisions about socially significant matters deserve very careful attention, and should come only after full and well-informed public debate. Here is a significant contribution to the debate. This well researched survey sets out in a measured and balanced way a range of considerations that should cause hesitation in UK political circles about the headlong rush to introduce gay marriage. It is not too late to press the pause button!
Prof John Nolland, Trinity College, Bristol

I commend this study because of its thorough treatment of the issues involved in the current debate. It has been well researched and documented and, on the evidence presented, its conclusions merit measured consideration by all.
Guy Hordern MBE JP

There is a disturbing, and growing, tendency to accuse those who oppose same-sex marriage of bigotry and prejudice, thereby intimidating them into silence, and effectively shutting down debate. In this study, the author reopens the discussion by spelling out, in clear and considered terms, why homosexual relationships are intrinsically different from heterosexual ones, and that the concept of same-sex marriage is in essence a category error.
Prudence Dailey, Lay Member of the General Synod of the Church of England

R. S. Harris does an uncommon thing; he brings reason into the ever present debate about the meaning of marriage and family. He debunks the argument often made that anyone opposed to same-sex marriage is bigoted. He explains the distinctive nature of marriage, and in so doing, demonstrates there is no compelling reason to redefine the institution…If we are serious about the future of our society and especially the future of our children, we would do well to carefully consider this well-written and cogent essay.
Prof Dale Kuehne, Richard L. Bready Chair of Ethics, Economics, and the Common Good, Saint Anselm College, New Hampshire;
Founding Director, New Hampshire Institute of Politics

The quality of this research underpins a clear and objective presentation of the case for true marriage. Here is a compelling argument that the campaign to redefine it is pregnant with serious consequences for future generations. Children have an absolute right to the optimum environment for their emotional and social well-being. This study reaffirms the conviction that human dignity is particularly respected in the Christian understanding of marriage and is ‘never in conflict with reverence for the Divine.’ (Joseph Ratzinger) We are indebted to R. S. Harris for his timely publication as a reminder of the prophetic warning that families ‘will be the first victims of the evils that they have done no more than note with indifference.’ (Pope John Paul II Familiaris Consortio n44)”
Edmund P. Adamus, Director for Marriage and Family Life, Archdiocese of Westminster