What are they teaching the children? | Conference Report 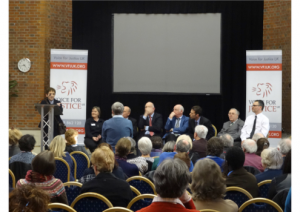 On Saturday, March 25 a large group of concerned parents and teachers gathered at the Emmanuel Centre in London. They were there for VfJUK’s groundbreaking conference examining the ideological reframing of education in the UK, with its analysis of the devastating impact on children and young people today.

Speakers were drawn from contributors to VfJUK’s recent book, What are they teaching the children?, co-published with Wilberforce Publications, and a copy of which was given to all delegates. The day started with a rousing speech from Baroness Caroline Cox. Drawing on her long experience of battling for the preservation of our Christian heritage and values against attack from cultural Marxism in the 60s, Lady Cox stressed that though the nature of the threat may have changed, it had in no way diminished. Rather, she said, it had grown in both scope and intensity, and she encouraged delegates to continue the fight before it became too late.

Further talks from Lynda Rose and Philip Quenby then expanded the theme of the battle between opposing value systems, evident in the UK today, and the particular importance of education to effect social, cultural and political change. Tackling the myth of secular neutrality, Lynda Rose argued that what we are seeing is the beginning of ‘secular’ totalitarianism, actively seeking to suppress Christian values and belief. Education has become a battleground, she said, because whoever controls children, controls the character of society and the future.

Philip Quenby then expanded on the nature and function of education, comparing the aims of different political and cultural systems down the ages, before clearly showing the radical divergence in approach today between Christianity and Secularism. Christian education, he said, has historically sought to encourage enquiry, with nothing ‘off limits’, in marked contrast to current secularist policy, which seeks to prohibit study and discussion of anything that casts doubt on the value system it now seeks to enforce.

Continuing this line of reasoning, Edmund Matyjaszek then described the evolution and current abuse of human rights, increasingly evident in this country, explaining the legal position and advising parents on how to maintain their rights. This was further supported by Christopher Shell, who provided detailed data charting the ill effects on children, and growing family dysfuntion, directly related to liberalizing policies of the last 50 or 60 years.

Afternoon sessions focused on specific areas where ideological reframing has been most evident. Anthony Busk looked at British values in relation to Sex and Relationships education (SRE), asking if we were safeguarding or endangering our children – with a perhaps predictable conclusion, in light of current policies that serve only to sexualize children at an increasingly young age.

Using explicit examples from the Chips material currently being used by schools to challenge homophobia, Brian Hadley then showed how the programme is unequivocally one of indoctrination, aimed at embedding rebranded sexual values and morality. This was followed by Robert Harris, who argued that even given the ideological agenda, Christian assemblies remain not just relevant but vital. Finally Dr Alastair Noble, a scientist, with a long background in education and one of Scotland’s former Deputy Directors for Education, showed how an ideological commitment to a particular view of origins – and in particular Darwinism, which refuses even to contemplate the possibility of an organizing intelligence underlying creation – was in fact closing down proper scientific investigation.

The purpose of the conference was above all practical, with the aim of providing parents and teachers with the knowledge and materials needed to combat what many today see as systemic child abuse, while suggesting ways to move forward that really will safeguard and protect the nation’s young.

To help achieve this, one concrete proposal to emerge has been the setting up a new online Forum for parents and educators. VfJUK is now therefore exploring the design and establishment of a new interactive website, tentatively at this point called ParentPower.com.

The idea is that it will contain articles and information relating to education and raising children in today’s world, with advice ranging from knowing your rights under the law, to shaping policy within schools and local authorities. And it will then provide a Forum where parents can discuss and debate the issues that really matter to them.

Even initial web design and hosting is costly, but it will also be expensive to maintain and run the site, once launched, and we need to employ someone with IT skills who can be responsible for monitoring and administering all traffic. If you share our excitement, would you consider supporting us by setting up a regular gift? Even £10 a month would be an enormous help.

As said, our aim is to mobilise and arm parents, providing them with a Forum where they can discuss the issues that really matter to them, and make their voices heard. Education should stimulate and encourage young minds to explore to the full, and in safety, the wonders of the world. It should not coerce or sexualize, by giving too much information far too soon!

DVD and CD of the conference will be available for order on the website shortly!

If you would like to volunteer email us at: info@vfjuk.org.