VfJUK delivers petition calling on Theresa May and the Conservative party to end discrimination, condemnation, and intimidation of MPs who support traditional marriage and morality 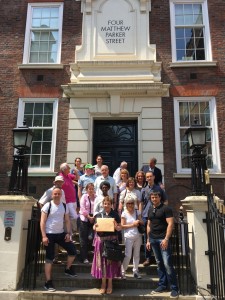 Text of the accompanying letter read:

Delivery of Petition: “We call for former Tory MP Andrew Turner’s immediate reselection and reinstatement as candidate for the Isle of Wight.”

Long-standing Tory MP for the Isle of Wight, Andrew Turner, was reportedly forced to stand down prior to the general election by Conservative Central Office, after having told A-level students at Newport that homosexuality was wrong and dangerous to society. We protest at such unjustified treatment. If Mr Turner honestly held this view and could give sound reasons why, while maintaining charity towards people experiencing same sex attraction, surely he was entitled to express his opinion?

As it is, a sixteen-year old gay activist pupil present at the talk posted her outrage on social media, with the immediate result that the MP was universally pilloried for his contemptible bigotry. For example, Labour election boss Andrew Gwynne said, “There is no place for bigotry and hatred like this in modern society, and no one holding these views is fit for public office.”  (http://www.iwcp.co.uk/news/Anger-over-alleged-Andrew-Turner-homosexuality-comments-314956.aspx).   Astonishingly, however, he was similarly condemned out-of-hand by Conservatives, a source for whom said: “There’s no place in the party for such views.” (http://www.telegraph.co.uk/news/2017/04/28/tory-mp-stands-allegedly-telling-students-homosexuality-wrong/)

Such response, resulting in Mr Turner’s forced resignation, is unfair, unjustified, and intolerant.

At no point was there any enquiry into why the MP held such views, or any examination of those views. Instead he was immediately condemned as a bigot. This is direct violation of Articles 9 and 10 of the Human Rights Act 1998, respectively protecting the rights to freedom of thought, belief, and religion; and the freedom to hold and express your own opinions.

All citizens of this country – including most especially Members of Parliament elected to represent the full diversity of opinion – have every right to express their honest and personal opinions without fear of recrimination, abuse and intimidation.

We therefore call on the Conservative party, and on Theresa May, as Prime Minister and leader of that Party, to have the courage to oppose totalitarian intolerance masquerading as liberalism, and actively commit to upholding freedom of speech, thought and belief for all.

In particular, we call for an end to discrimination, condemnation, and intimidation against MPs who, as result of honestly held conviction and/or Christian belief, support traditional marriage and morality.

Please feel free to use or adapt the text of this letter to write to your own MP, and/or Theresa May.