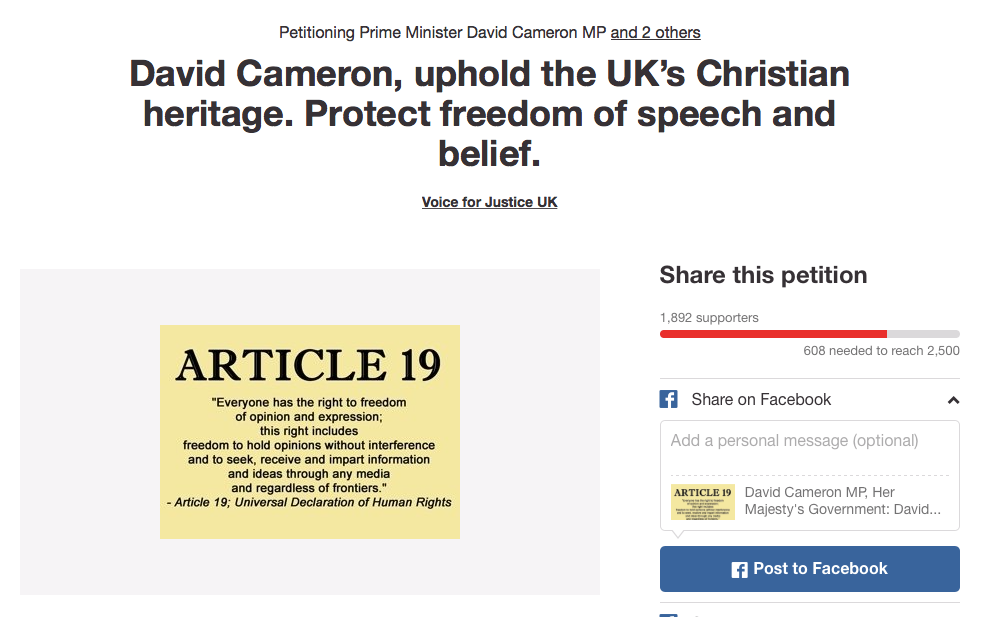 With growing support for multiculturalism and sexual diversity, the last years have seen increasing restrictions imposed on Christians where affirming and standing on doctrines laid down in the Bible. Indeed, pressure is now being exerted by non-believers for modernization of the Bible, in order to make it compatible with changing attitudes.

This is discrimination and a clear infringement of the rights to freedom of speech and belief, as laid down in Magna Carta and foundational to British law. Moreover, the number of legal actions brought against Christians, citing alleged discrimination against those of other faiths or sexual orientation, is no more than orchestrated intimidation. If allowed to continue unchecked, such cases will lead to the silencing and marginalization of Bible-believing Christians. Equality law provision, as it stands, discriminates against Christians.

Christians are called to love all unconditionally, but we are not called to affirm all teachings and beliefs as of equal value. Britain is founded on Christian belief and tradition, and citizens of the UK have the right to practise that faith freely and without interference from those who disagree.

At the same time, giving equal – or higher – standing to belief systems inimical to the traditions of freedom and respect for all that are enshrined in Christianity will erode and ultimately destroy our society.

As a Christian based society, the UK is called upon to love and help all those in need: but we are not called to embrace traditions and beliefs that run counter to our values, and our hard won rights ( for example, the rights of women). Those who seek shelter in our society must respect our beliefs and embrace our values.

We call on David Cameron and Her Majesty’s Government to uphold without fear or equivocation the Christian roots and heritage of our nation, and to safeguard Christian freedom of speech and belief.